Going Half the Distance

SPOILER ALERT: Don't read unless you have finished "A Discovery of Witches". 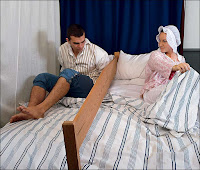 OK I've had days and days to think about it.  And I think the reason the "non-sex sex" bothered me has become very clear:  It's because they did everything else!  What's with that?  If they had remained platonic longer...maybe even spent half the book not getting along...and just did some kissin'-n-huggin' toward the end...I'd have accepted that they didn't consummate the vampire marriage.  But to jump into bed nekid...and be all lovin' up on each other...and inserting various digits into various crevices...THAT is what I had a hard time wrapping my brain around.  Not to MENTION the fact that we know she went downtown (in her sheet tent) and he most likely did as well.  I mean, come on!  If someone is going to jump into bed naked with you - time and time again - I don't see how it's POSSIBLE that you're not going to have intercourse the old fashioned way.  Hell - if nothing else - then by ACCIDENT when he's kissing her collarbone and she's musing about their bodies fitting perfectly.

And I get the bundling thing.  I find it somewhat intriguing in both its stupidity and its sweetness.  But I don't consider what Matthew and Diana were doing to be bundling or anything close to it.  They had their clothes off.  And they weren't just talking.  They had ORGASMS for god's sake!  Let's call a spade a spade.

And also - Matthew kept talking about wanting to take his time and make their first joining of nether regions special.  Well boyfriend better absolutely DELIVER in Book 2, dontcha think?  OH yeah.  I am giddy with glee in anticiPAtion of it already!!
Posted by Purgatory Carol at 9:57 AM