A Hunting We Will Go

SPOILER ALERT:  Don't read unless you have read up to the first three pages of Chapter 28 in A Discovery of Witches. 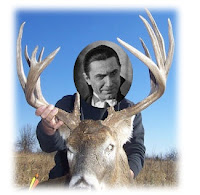 So Diana insisted on going hunting with Matthew and watching him feed.  One word:  GROSS!!!  No wait, two:  DUMB!!!  WHY on god's green earth does girlfriend feel the need to watch her vampire boyfriend - I mean "husband" (but we'll get back to that) - take down a deer and suck the blood out of it?? Does this make their relationship stronger?? I don't think so.  She wants him to trust her - so have him tell you about his past.  Get it out of him (preferably by not proclaiming you know everything about his wife/son dying and that OM told you.  Abrasive, party of you?)  But watching him feed?  I get the whole "trust" thing - but there are some things in a relationship that can be left to the imagination.  If he were human, would you insist on watching him sit on the throne, too? (And I don't mean the monarch-sort.)

If it were me, I'd be like "Oh Matthew dear...I'm just going to sit here in your huge bed and let Marthe bring me baked goods and flavored decaf (not a tea drinker) whilst you run around the forest doing...whatever it is that you do.  Maybe I'll even do some clothes shopping with OM (which I am truly hoping happens at some point.  How delicious would that be??)  Catch ya later!!  Let's meet back up for some good lovin' and a back rub around 4.  Ok....break!"

Now back to the "husband/wife" part.  I'm only 3 pages in to the chapter so I don't know much - but Matthew finally revealed to Diana that - in the vampire world - they are married.  Yippee!  Works for me!  He's gorgeous - splendidly rich - worships me - and will never NOT be hot because he's a vampire.  My god - it doesn't get any better than that!  And if he decides to run off with a younger witch down the road...girlfriend can take HALF!  ;)
Posted by Purgatory Carol at 9:57 AM